Yes. Dr. Atef Aziz was the common name used in Egypt. Then Dr. Atef Mikhail was used briefly. In the US the name Atef Meshreky is on the books, and on official documents in both the US and other countries. When joined the Orthodox Church in America [OCA] the name Fr. Seraphim was claimed. Then when tonsured as a Stavrophore on March 22nd, 2016, the name Fr. Macarius was given. 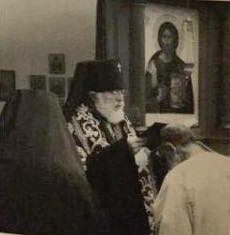 Was Dr. Atef Aziz a monk in the Coptic Church?

No. There's no reference to him being a monk in the Coptic Church. In the excommunication decree (2002) he was stripped off the rank of (αναγνώστης) which is a "reader" sub-deacon rank. It is regularly mentioned that he was a "consecrated" servant. The consecration is not a clergy rank.

Why Dr. Meshreky and his disciples were excommunicated?

They started in Asyut, upper Egypt around 1980. When Bishop Mikhail found out about their deviating prayer practices, prophesies, and forming a closed group, he expelled them from serving in the diocese. They went to Pope Shenouda and vowed to repent. He distributed them to several churches within his jurisdiction. Years later found out they're lying, forming closed groups, etc. Accordingly the Synod decreed barring them from teaching in 1996. When they did continue, the Synod formed a committee to investigate. They refused to repent. So the Synod excommunicated Dr. Atef, a monk priest, and 11 of his "consecrated" in 2002.

We have copies of several of the relevant documentation, and verified and interviewed many of the then overseers and the investigators. Contact us if needing more detail. See also this video of Pope Shenouda in 2002, with English subtitles.

Did Pope Tawadros attempt to reverse or lift the excommunication of Dr. Meshreky?

One of several lies propagated by Dr. Meshreky's disciples. Such as in ex-priest Bishoy Andrawes "Letter to spiritual children" of January 2016 he claims: "Pope Tawadros himself attempted to restore this excommunication of Dr. Atef Aziz, but some of the bishops stood in his way".

Actually, soon after the claim was made, HH Pope Tawadros confirmed the excommunication in HH communication and decrees, and emphasized by republishing the Holy Synod's decree in the official publication Al-Keraza dated March 11, 2016.

Is there clergy followers and disciples to Dr. Meshreky in the Coptic Church?

What are the beliefs and teachings of Fr. Macarius [Dr. Atef Aziz Meshreky?

His doctrine is summed up on the home page. Some of his books are mentioned on the "Book Reviews" section. Recordings of his media and writings are available on several Internet sites. But some were removed or hidden from public at different times.
Please contact us if you are searching for something specific or need further information.

Under what OCA jurisdiction is Fr. Macarius [Dr. Meshreky] and his disciples?

The ones joined the OCA are under the jurisdiction of ArchBishop Benjamin, Diocese of the West.

Why Dr. Meshreky has chosen the OCA?

Fr. Macarius teachings repeatedly point to the decline and corruption of the Church after the 4th century. believing that they (the discipleship) are the new Church for the 2nd coming since "the Church has lost its authority and message". Through new anointing, and a prophet preparing for the 2nd coming, analogous to John the Baptist for the 1st coming of Christ. There's no reason for them to believe that the OCA is an exception.

It is not a choice. Dr. Meshreky is benefiting from the "Eastern Orthodox monk" label on his books and teachings, even before being tonsured in OCA. No other Orthodox Church accepted him and his disciples, and as an already active group, and none would.

The "disciples" have made it clear that they would not assimilate into the OCA, and if they leave the OCA, they will leave as a group and continue together. Indicating loyalty to the cult rather than to a Church.

Dr. Meshreky always indicates that he has a calling from God, commissioned by God, entrusted with the generation, guided by the Lord and the Holy Spirit. Which makes him above any Church hierarchy, and above questioning. He has been consistent about that for over 45 years. The discipleship worldwide has its own hierarchy of "spiritual guides", and minimizes the clergy role to only serving communion and taking "common" confession.

Why and how the OCA is accepting a heretic group?
How is the OCA allowing such teaching and practices?

We do not have a credible answer from the OCA. The facts are:

If you have further questions to the OCA, click here and we'll forward your inquiry to them, or contact us.

We are unaware of any spiritual explanation for the choice to now headquarter in Phoenix, AZ. He has no explanation on the records for it.

But there are obvious "earthly" reasons for the "discipleship" choices of current locations, and family reasons for Arizona, not mentioned here to protect privacy.

How many followers of Dr. Meshreky are out there?

Sometimes we receive questions about Dr. Meshreky's disciples, supporters, and their geographical distribution. Please contact us if such info is important to you.

Did clergy call the police for relatives and families of disciples or recruits?

Police call information can be obtained from the Sheriff department under the "Freedom of Information Act".  On several occasions Hegomen Bishoy Andrawes did call the police for family members of "disciples" and recruits looking for their whereabouts. There is also an occasion where an OCA priest threatened a mom that he may call the police for her.

We could not find a reasoning in the discipleship doctrine for the repetitive dependency on police services, spiritual, Biblical, or otherwise.

Please contact us if such info is important to you.

Register For This Site