The book is one of six books authored by Dr. Atef Meshreky between 2014-16. Most of those books deliver a doctrine for the current time/generation. The last of those books “The Bride & The End Times” presents a more complete doctrine rather than parts of it or ideas in development. The doctrine has no new components, rather a combination of the typically re-emerging movements within various religions and sects over the known human history. Dr. Meshreky presents it in  a few flavors based on the audience background. His justifications include his experiences as a self-consecrated young man in an oriental orthodox church in the late 20th century.

The book seems to be a verbatim to Dr. Atef Meshreky’s lectures in Kirjath Jearim in Israel in August 2015 [P10, P14]. That conference “End Times and the Bride” was held in conjunction with other speakers: Gabriel Alonso-Martinez, and brothers Reuven and Benjamin Berger. The Bergers are leaders of "Kehilat ha’she al Har Zion" ["Congregation of the Lamb on Mount Zion"] in Israel, members of TJCII, and the Messianic movement who are "Jews who continue to be Jews who believe in Jesus" [Benjamin Berger, Session 8].

The book is sold through Amazon. The lectures of the book are also media recorded and accessible at: 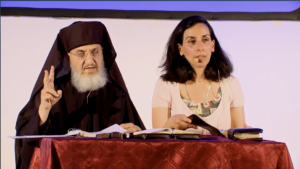 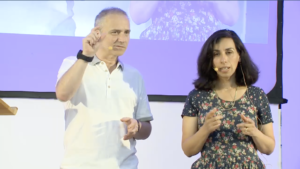 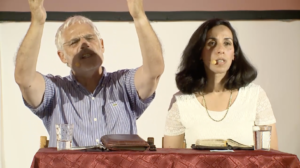 The apparent purpose is to recruit for the discipleship; as well as strengthen the messianic partners' doctrine through 'early Christianity' claims. With a tome similar to the author’s article [http://shineinternational.org/Content/1/1/23/Trustees-of-the-Kingdom] that claims anointing of new prophets, intercessors, and men of God who have special features [Ch7] appointed by the Holy Spirit. For such, the author is taking a simplistic scientific approach to provide and justify a structured doctrine.

The justifications used for the modern doctrine are:

The book structured traditionally as the 3 phases: The first few chapters are stage setting detailing the factors and objects to consider. Then it smoothly transitions to assessing the current states and establishing justifications and arguments. Finally thereafter delivers what must be done and what must happen based on the previous analysis if digested.

Throughout the book, the author attempts to establish:

Credibility: through repetitive and sometimes heavy use of Bible verses and situations.

Justification: through critical evaluations of the current state of the Church, Israel, and humanity; and comparing to imaginary state of the first four centuries AD. Also extrapolating trajectory projecting Israel’s journey in the Old Testament.

“The end is near” has been used throughout human history gazillion times. The concept sells typically for a small percentage of market typically for less than 30 years. But that’s usually more than sufficient for the owner.

The concept is essential for this case as well as many other, as to counter the question of “why now is different?” and “why don’t we continue on our parents’ path?”.

But this has several issues:

2. The state of the Bride

PART I: THE BRIDE FROM THE BIBLICAL PERSPECTIVE

Emphasizes Israel as the people of God, and the gentiles as grafts in it. The benefits to the doctrine are:

PART II: THE BRIDE FROM THE HISTORICAL PERSPECTIVE

First subsection lists references from the Book of Acts referring to the apostles meeting the temple, and some apostles and some first Jew converts maintaining Jewish customs. To such audience it may provide the impression that Apostolic age Christians maintained Jewish customs, and were in harmony and worship with the Jews.

Then the second subsection establishes that during the first four centuries, at least in some areas, “The early Christians never thought of the possibility of separating Christianity from Judaism.”, and potentially attending the synagogues every Sabbath, and “keeping the Sabbath”.

The author then claims that in the 5th century, due to political situation, the Church councils “started to be separated from the Jewish synagogues”. Much later, the Reformation movement in the 16th century compounded the separation.

This is a conclusion of the last two chapters, concluding that: 1) The growth of the early Church was connected to her Jewish roots. 2) The Bible authors were all Jews. 3) exemplifies the Jews’ respect for the scriptures, that respect was lost by time in the church.

Chapter 5 “Introduction: the Biblical Meaning of the Word ‘Economy’”

About the Οικονομία “divine economy for us now”. Setting the stage for the reader to accept that God has a different Οικονομία for every stage even in the AD. And questioning what is God’s Οικονομία then for this stage of end time??

Chapter 6 “Stages of the Divine Economy”

Building on the previous chapter idea, this chapter is titled “Stages of the Divine Economy”! Now the author has started the administration of the justifications of the doctrine. So the chapter is 41 pages… He goes at length from the start of the creation to show that God had different economies for different times.

Moving through to the modern times, tying a number of aspects together:

Chapter 7 “The Economy of this Stage, the Era of the End times”

PART IV: THE BRIDE FROM THE PRACTICAL PERSPECTIVE

Split into 7 subsections. Seems to list seven “practices” or characteristics for “Restoring the Lost Spiritual Inheritance”. Within those seven points are some of the doctrine and fellowship elements and justifications:

From Zachariah 14:5 “Thus the Lord my God will come, and all the saints with you” and Mat 25:6-7 ‘And at midnight a cry was heard: ‘Behold the bridegroom is coming; go out to meet him!’ Then all those virgins arose and trimmed their lamps.’ The author answers a question “Who are these saints? They are surely the Bride who has been prepared for Him and who has waited for Him.” Then goes on to explain the ‘rapture’ based on Thessalonians 4:17. [P190-191]

Then emphasizing with references that the bride would be souls from “all the nations, the Gentiles, and from Israel, those returning to the Messiah.” [P192]

“What about the rest, those who are not the Bride?” “The departed souls who are not the Bride,” “cannot rise until the end of the period of the Lord’s reign.” [P197] The rest of the souls who will be alive at the time of the coming of the King will be left for a stage of sanctification and getting ready for what is to come. They have a chance to respond to the gospel preached to them.” [P197-198] “Regardless of whether the ‘thousand years’ is actually a calculated time”… “it is a term which refers to a sufficient time full of blessings and richness and completion of God’s redemptive purposes to their fullness.” [P198]

Conclusion “THE RELATIONSHIP BETWEEN THE BRIDE & NEW ZION”

“First: Zion in the Scriptures” “· The Lord dwells in Mount Zion”; “· Zion is” “a place for the people to learn about God and His ways”, “a place of healing and forgiveness”, “a place of great joy”, “a place for releasing God’s blessings and His authority to the earth”; “Zion experiences the abundance of God’s provision”; “Zion has a special favour in God’s eyes she is inscribed on the palms of His hands and He watches her walls”; “Zion has great powers and might in wars”; “Zion will awake and put on her ornaments; nothing unclean shall enter her and the cloud of God’s glory will cover her”; “Zion wil be filled with the glory of God’s presence to shine to others, to the nations and the kings”; “Zion in her royal image: the Lord is in her midst and she is the subject of His joy” [P204-209]

“Second: The significance of these features of Zion” “Zion is the place where the Lord meets those who have been prepared for ‘special encounters’ with the Lord. They are the bridal souls whom the Holy Spirit gathers together in ‘Kingdom units’ so that their preparation may be completed through these encounters.” “The souls who are driven by bridal love need to get together in these units in order to encourage one another and receive the promises related to Zion: promises of protection, blessing, God’s revelations, and so on.” “The time will come when the Holy spirit gathers these ‘Kingdom units’, the spiritual Zion, not necessarily physically but spiritually. Through them, He will fulfill God’s final purpose: the final harvest and preparing the scene on earth for the return of Christ, the King.” [P210-211]

“FINAL APPEAL” “Therefore, I entreat you all not only to read the talks; but, let them be a spiritual drink’ that fills you.” [P212]

Contradictions to the Bible & the Church

1. Asserting knowledge that we are in the “final stage” and “the era of the end times” conflicts with the New Testament warnings against such speculation, and against yielding to such teachings and teachers. This is an age old idea that has been recycled throughout history with various justifications. As from the New Testament’s and the Church’s perspectives, we’re and have been living the “era of the end times” for over 2000 years. See “The End Times” page for details.

2. Prophesying that the apostolic Churches are abandoned by the Lord, and new “units”/”anointing”/”apostles”/”prophets”/… will “restore the lost inheritance” and become the “Bride”:

3. Israel and Gentiles as the “Bride”, and the ideas of Judaism of early Christians, keeping the Sabbath, and harmony prayer living between the Jews and Christians are fallacies. The New Testament declares the end of Judaism, the Jews enmity to Jesus, and their persecution of Christians. See the page on “Judaism and Christianity” for details.

4. The idea of different God’s economy (Οικονομία) for different “stages” in the New Testament is non-existent! The Lord gave us up to the Book of Revelation, which covers our present and future all the way to the “End Times”, with a warning not to add to or omit from it. There’s no change in the 'economy of salvation' over the New Testament 'eras', whether two thousand or two billion years! Also the Churches believe that God’s economy is dispensed through the Church, as was through the Apostles. So the justification that God’s “modern” economy of the “final stage” of the “End Times” calls for a new Church “units” is unfounded and unacceptable.

Also interestingly, the author contradicts his writings from 2 years earlier "There are two different plans, or economies, in the Bible: the Old Testament and the New Testament." [Responsibility for the Generation, CH1S2], where he is explaining the difference between them, with no claim of 'changing economies' for the New Testament.

5. Claiming that “In the end times, there will also be new ministries, new visions, and new anointing” [see also http://shineinternational.org/Content/1/1/23/Trustees-of-the-Kingdom] for new “apostles”, “prophets”, “evangelists”, pastors”, and “teachers” chosen from people who “have special features”? Other than the author’s justifications and extrapolations, these have no foundation nor expectation in the New Testament and the Apostolic Churches. On the contrary, the Churches do not even recognize a living person as a saint, let alone an “apostle” or a “prophet”, regardless of what “special features” and “features of the Bride” that person or group has!

6. The concept of "Jews who continue to be Jews who believe in Jesus": The belief of the Church, including St. Paul, is that Judaism has ended by Jesus, the true sacrifice. As the rituals and laws of Judaism have ended. The veil in the Temple was torn on Great Friday, and the High Priest has torn his garment. We also see in the New Testament that "Indeed I will make those of the synagogue of Satan, who say they are Jews and are not, but lie" Rev 3:9, and while "And I heard the number of those who were sealed. One hundred and forty-four thousand of all the tribes of the children of Israel were sealed" Rev 7:4, "After these things I looked, and behold, a great multitude which no one could number, of all nations, tribes, peoples, and tongues, standing before the throne and before the Lamb, clothed with white robes, with palm branches in their hands, " Rev 7:9.

This site uses Akismet to reduce spam. Learn how your comment data is processed.

Register For This Site